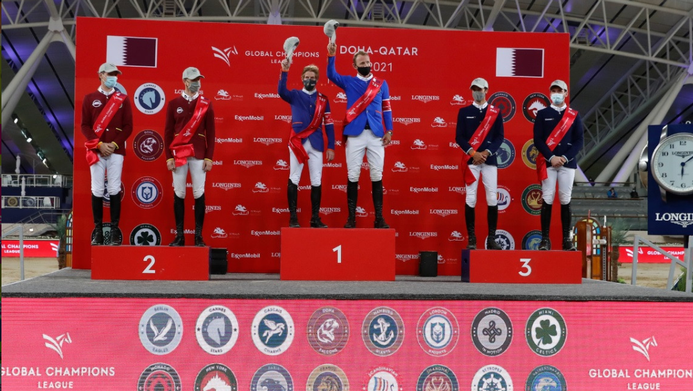 Valkenswaard United seized the GCL ranking lead in spectacular style in Doha today with unbeatable performances by the team's top guns in the opener of the 2021 championship race.

Heavyweights Peder Fredricson and german Marcus Ehning took full advantage of the extraordinary horsepower of Hansson WL and Stargold with flawless rounds to seal the coveted first win of the season.
A delighted Marcus Ehning said “It's always great to be here in Doha. I think I can talk for everyone to say it is a very special event. Peder made my life easier he jumped a fantastic clear round, I know my horse is fast but you also need some luck. I am really lucky to be in a strong team like this. We have 6 very strong riders and I am very lucky to ride with them."

Peder Fredricson explained after his round: "It's really amazing to be back jumping at top level sport again. It is fantastic to ride with Marcus and I am really looking forward to the rest of the season!"

Fans around the world lapped up the welcome return to GCL action and the highest level of team show jumping.
The first leg left no doubt that this year’s GCL championship will be a titanic fight for dominance as team owners, managers, riders and trainers set their sights on victory and fantastic prize money.

As the sun started to set across Qatar’s capital city Doha, the stunning Longines Arena at  Al Shaqab lit up as 15 teams came forward to battle it out for the first time in the 2021 season. Unliano Vezzani’s challenging course saw only two teams manage to jump double clear with the competition full of shock results and cracks under pressure with dramatic changes up and down the gird.

Here’s how the competition unfolded:

WINNER, Podium GOLD
Valkenswaard United
Peder Fredricson and Hansson WL lit up the arena as they powered around the course. The Olympian delivered again for the team, finishing on a flawless weekend score leaving them poised  to claim the first leg of the championship. With many of the second riders unable to back up their teammates it was clear all eyes were on German maestro Marcus Ehning and Stargold to seal victory. Despite the pressure, the pair delivered, finishing on a score of zero in a super speedy time to win the first GCL leg of 2021!


Podium, SILVER
Shanghai Swans
German rider  Christian Ahlmann and Dominator 2000 Z were on electrifying form, flying around the arena in a masterclass as the German champion managed the impressive black stallion beautifully around the testing track. They showed everyone how to do it and handed the reins over to Max still on a 0 score. Austrian
Max Kuhner and Elektric Blue P then made it the first team to jump a double clear finishing in 2nd place overall in 145.22s.

Podium, BRONZE
Berlin Eagles
German Christian Kukuk knew the best horsepower would be crucial to a good result today, bringing out consistent Mumbai, but it wasn’t meant to be today as they had a pole and time fault leaving German Philipp Weishaupt and Asathir to bring home the goods. A horse change for Weishaupt to proved a great strategic decision as  he cruised round for a clear to help Berlin Eagles take third place.


Paris Panthers
First of the competition to go Gregory Wathelet knew that only a faultless round would do for the Panthers. Nevados S was looking fresh and skipped his way around the huge sand arena opening up to the last fence and producing the all-important clear. Handing over to Penelope Leprevost and the athletic stallion Vancouver de Lanlore they also made it look easy and the team stayed on the same 12 faults carried forward from round 1 in a time of 148.73s.

Hamburg Giants
Suus Kuyten was delighted with her round with Alfa Jordan despite 6 faults. Experienced Dutch rider Bart Bles set off at a pace with Kriskras DV, but it all came apart as they picked up two early faults seeing the team tumble down the leaderboard ending today on 22 faults overall and at the bottom of the leaderboard.

Prague Lions
The Lions pulled in Anna Kellnerova and Catch Me If You Can Old and the swap paid off as the combination flew round the 1.55m / 1.60m course clear. In excellent form, Delux T & L and Niels Bruynseels secured the second clear helping the Lions finish on 8 faults and 7th place overall.

London Knights
Winners here 12 months ago the Knights pulled in Lorenzo De Luca and Nuance Bleue VDM Z but they couldn’t keep all the fences up as the GCL upright coming out of the double fell piling the pressure on teammate Olivier Philippaerts and H&M Legend of Love. But there was disappointment as the pair also picked up four faults leaving the team on a total of 16 overall.

Scandinavian Vikings
Team owner Geir Gulliksen and VDL Groep Quatro took centre stage as the sun began to set across the arena. A rattle at the GC Prague Playoffs upright and the penultimate fence put the team out of contention for a podium today. Henrik von Eckermann and King Edward looked determined as they set off at a pace and took a stride out to the final fence clearing it with ease slotting the team in 10th place.

Monaco Aces
The Monaco Aces kept everything exactly the same as round 1 not making any rider or horse changes. U25 rider Jeanne Sadran and Vannan got deep into a fence early on knocking a pole and piling the pressure on teammate Jos Verlooy. Jos and Varoune knew a fast clear would keep them in contention for a podium place and they finished 5th overall.

Miami Celtics
A new face on the GCL team this year young Polish rider Andrzej Oplatek and Stakkatan also got caught out by the GCL upright and the wide GC oxer then fell as well immediately dropping the Celtics down the order. Maurice Tebbel had his hands full with a fresh Don Diarado.  His tight roll back to the penultimate fence didn’t pay off as it fell and the team finished with 12 faults.

Doha Falcons
A fast four for Titouan Schumacher with Atome Z and a clear from Constant van Paesschen riding Isidoor van de Helle put the home team on a score of 8 overall. Constant clearly had the team strategy and tactics in mind, riding a speedy round to help them slot into 6th place.

Madrid In Motion
Previous GCL Super Cup winners Madrid In Motion knew they had a good opportunity to start the season on a high and kept their team exactly the same as last year. Eduardo Alvarez Aznar shook his head as he exited the arena on Rokfeller de Pleville Bois Margot, the team now on 8 faults leaving the door open for other teams to take the podium. Mark McAuley and Jasco vd Bisschop pulled out all the stops to finish clear but it was too late and they had to settle for 8th place.

Cascais Charms
Cascais Charms have added new horsepower to their roster this season, with Rene Lopez bringing out Kheros van’t Hoogeinde to contest the first leg of the championship. A time fault and one down meant Eric Lamaze and Dieu Merci van T & L would have to produce a flawless clear to help the team in their quest for success. The Olympic champion showed his expertise and kept the team on a total 9 faults overall.


St Tropez Pirates
Flying Frenchman Olivier Robert set off like a rocket on Vivaldi des Meneaux.  Unfortunately, their risks didn’t pay off and they picked up 8 faults. It all fell apart for normally consistent combination Pieter Devos and Claire Z. Normally cool under pressure, three fences came tumbling down moving the Pirates right down the leader board.

New York Empire
Denis Lynch piloted Cristello carefully around the full up course but they came in a little too deep to a couple of fences rolling the poles and adding eight to their score. The team slotted in just behind Berlin Eagles overall. Long-term anchor Scott Brash and Hello Jefferson made it look effortless , the 12 year old gelding popping over the demanding Exxon Mobil vertical with ease. The brilliant clear was watched by teammate Shane Breen who clapped with approval as Scott crossed the line.